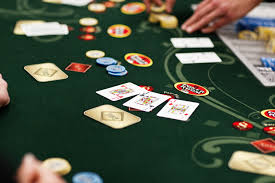 The game is played with a single deck of 52 cards. Three Card Poker is actually two games in one. There is the Play/Ante game where you are playing against the dealer to see who has the highest hand. There is also the Pair Plus game where you are wagering on whether or not you will be dealt a pair or better. In most casinos you can bet on either of the games but some casinos require you to make an Ante Bet in order to bet the Pair Plus portion of the game.

The Play
There are three betting circles in front of each seat. The top betting circle is labeled Pair Plus where the player puts a wager on the pair plus game. Beneath that are two circles labeled Ante and Play for the base game. The game starts with the player making a wager in the Pair Plus and or Ante circle equal to the table minimum.

After all the players have made their bets the dealer will give each player a three card hand that is dealt by the Shuffle Master machine. Play begins with the first player to the dealer’s left and continues clockwise around the table.

After all the players have made their decisions, the dealer will turn over his three card hand. The dealer needs to “qualify” with a hand of Queen or higher for play to continue. If the dealer’s hand does not contain a Queen or higher all players still active in the hand will be paid even money for their Ante wager and their bet on the Play will be returned to them.

The Hand Rankings
Because you are only dealt three cards the hand ranking are a little different than with traditional five card hands. This is because of the mathematical probabilities of making certain hands. The hands are ranked for the highest to the lowest as follows:

We cannot use real money on any of the Three Card Poker tables at your casino party. We furnish two-sided tickets for drawings on prizes, as well as provide fake money to start the party.

Contact Wow VIP Events at 972/300.4100  if you have any questions about renting Three Card Poker for your casino party, or fill out our Request a Quote form. We look forward to hearing from you!