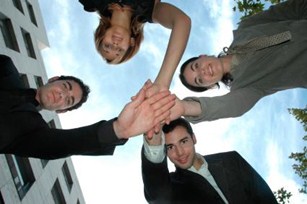 Straighten your bow tie and strap on your Watch Phone: you’re about to star in the The Spy Game – the latest creation from The Go Game! The Spy Game features the latest LG 9800 phones on the Verizon network, all the fantastic standard elements of The Go Game, and stars YOU.

Here’s how The Spy Game works:

In addition to our standard Go Game, you or someone from your office becomes the star of video clues delivered throughout the game on our high-end devices. In advance of your Spy Game, we will provide you a video camera and a simple yet exciting script – no major acting skills required! We’ll only need 5 to 10 minutes of video footage to make you or your CEO into (for example) an omnipotent Bosley character issuing clues to each phone and guiding teams along their journey.

BACK TO TEAM BUILDING